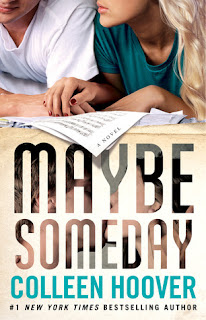 At twenty-two years old, Sydney is enjoying a great life: She’s in college, working a steady job, in love with her wonderful boyfriend, Hunter, and rooming with her best friend, Tori. But everything changes when she discovers that Hunter is cheating on her – and she’s forced do decide what her next move should be.
Soon, Sydney finds herself captive by her mysterious and attractive neighbour, Ridge. She can’t take her eyes off him or stop listening to the passionate way he plays his guitar every evening out on his balcony. And there’s something about Sydney that Ridge can’t ignore, either. They soon find themselves needing each other in more ways than one.
A passionate tale of friendship, betrayal, and romance. Maybe Someday will immerse readers in Sydney’s tumultuous world from the very first page.


WHY this book.
Because I like the books Colleen Hoover writes, I’ve read Hopeless and Slammed and I loved both of them. She had a way to suck you into the story and feel like it is happening to you.

COVER impressions.
Pretty standard for NA, nothing special. Like the colours though.

FIRST THOUGHTS.
Loved it !! Ohhh the romance <3 How I love a good romantic story ! Makes me all happy and fuzzy on the inside. And the drama, how I loved the drama and hurt in this beautiful tale. Purrr..

PLOT.
The story starts with Sydney, on her birthday, outside in the rain waiting for a cab. She just lost her best friend and boyfriend (they cheated together on her) and has no idea where to go from there. Luckily she has got to know her neighbour Ridge (who told her) and after some persuasion she moves to the empty room in his apartment. There is only one thing about him, he is deaf. He does not talk, and they communicate mostly by texting. They’re both really passionate about music and Sydney ends up helping Ridge with the lyrics for his band. Of course, that’s not the only thing they end up passionate about.. but well, Ridge had a girlfriend with her own secrets. This complicates things, and a lot of hurt comes to pass. But well.. in the end… <3
It had a good pace, not too fast, but luckily not too slow either. She made it look natural, a love slowly developing, and trying to fight against it, into something beautiful and real.

ROMANCE.
Romance everywhere !! She just writes it so compassionate. When they hurt, I hurt. When they love, I love. Just perfect. The road they followed had a lot of obstacles, but in the end they still found each other. And the lyrics they wrote together, so beautiful ! I loved that she put that in there, how they were so brutally honest about their feelings to each other in those lyrics.

SETTING.
The story takes place in Austin, Texas, but except for some remarks about the hot, humid weather we don’t get to know a lot about it. I think she is supposed to go to college (a middle school teacher in music?) but you barely read anything about that.. I kind of wandered about that.
I know, I know it is NA, so it is mostly about romance and the drama.. but I did miss a bit more around that so to say.

CHARACTERS.
Sydney. The female main character, half of the story is from her view. After losing her trust to the people she trusted most of all, she hardens a bit. She is a strong person, very “good”. High values of what is wrong and what is right, that she feels guilty most of the time for liking Ridge. Would like to have known more about her background, she kept it kind of vague.
Ridge. Awesome deaf guy. I really liked how she played into that, with his need to touch more instead of hearing.. made some really sexy scenes.. Makes him a really sweet and cute guy, you’ll love him instantly. He is very protective of what he holds dear.
Maggie. Ridge’s girlfriend. She has a very kind personality, very happy, like sunshine. I love her attitude towards her illness, and how she wants to live her life. She did good by making her like this, makes it as a reader even harder, because she is so likeable, you don’t want her to lose.
Warren. The roommate and best friend of Ridge. He can be quite the asshole, but makes for some funny scenes as well. Protective of people in his own way.. But loyal as well. Would like to know more about him and his love !!
Bridgette. The other roommate, and the “secret love”  of Warren. You don’t see a lot of her, except that she is kind of a bitch most of the time. Would have like to know more about her as well, why she is the way she is…
Brennan. Ridge his little brother, who is the singer of the band.
Tori. The ex-best friend, who cheated with Hunter. I don’t get it though, they have been friends for years, and according to the book she even introduces them in the first place !! Wtf is wrong with her !?
Hunter. The ex-boyfriend, who is an asshole from the start. No idea what she liked about him.. Dislike that she gave him that name, one of my all-time favourite guys (from the Sweep series) has the same name. Ugh. He puts that name to shame !!

FAVORITE character.
Oh my.. I don’t know.. Mostly I like to pick the one I would have like to know more about, or who was just really awesome in the story… I think I’d like to pick Brennan, I know next to nothing about him and even the one scene he was in got kind of skipped.. (Warren’s birthday party) Soo.. give me more on him !!!

THE BAD.
While writing this review I keep noticing how little I know about well.. EVERYTHING. Yes they have a beautiful love story that made me swoon and hurt right along with them.. But I know almost next to nothing ! And well, I kind of miss that here…

“For her I bend, for you I break”
.
“There isn’t a doubt in my mind that we could be perfect for each other’s life, Sydney. It’s our lives that aren’t perfect for us.”
.
“There are only twenty-six letters in the English alphabet. You would think there would only be so much you could do with twenty-six letters. You would think there were only so many ways those letters could make you feel when mixed up and shoved together to make words.
However, there are infinite ways those twenty-six letters can make a person feel, and this song is living proof. I’ll never understand how a few simple words strung together can change a person, but this song, these words, are completely changing me. I feel like my maybe someday just became my right now.”

FINAL THOUGHTS.
So yeah.. READ IT !!! If you’re really into romantic and dramatic love stories you will love it. I loved it. I just wish there was more to it, more than just the romance.. more background and dept for the other characters.… So I think it does not deserve the full five Freyja’s.. So I will go with 4.5 Freyja’s.. because even thought I missed something, she made me feel right along with them, and that’s a gift that should be rewarded !