Top Ten Tuesday. Top Ten 2015 Releases I Meant To Get To But Didn't. 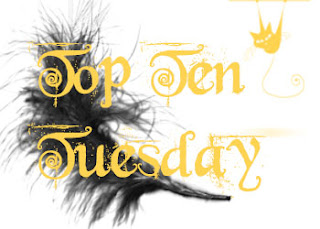 Hosted by The Broke and the Bookish

So this week topic is Top Ten 2015 Releases I Meant To Get To But Didn’t. Every year there are so many new books and series that are being released, it’s too much to follow ! And not only that.. you also have the sequels from other series !! TOO MUCH !! But well, at least we’ll never get bored. I did have to put some thought in it though, because there are a lot that fit this topic for me, but all in all some are a lot more important to me than others ! So here is my list, in no particular order !

Dead of Winter by Kresley Cole. This is the third part in the Arcana Chronicles and I love this series. The first two books were amazing and so original, it was love at first sight. But.. this one does not come in the cover I have the other two books in and that just sucks. It has put me off so far.. and well, everybody said it ended with such a mayor cliff-hanger that I decided to keep waiting until the fourth one later this year to buy it… Hoping on the other cover to come later…

Menagerie by Rachel Vincent. I have no good reason to keep this one waiting, except that I just haven’t gotten to it. I heard great things.. so I hope I will finish it this year.

Queen of Shadows by Sarah Maas. I absolutely adore this series, especially after the last one. Just woow.. Like the real story just got started in book three ! But this fourth one.. I know exactly where it is at home.. on my nightstand were it has been for months XD But every time something just stops me to pick it up, or I’m not in the mood.. *Sigh* I REALLY need to pick this one up soon!!

Soundless by Richelle Mead. When it became known that this book was in the make, I was so happy.. YEAH another book by one of my favourite authors !! But.. I heard so many bad things about this one, got a lot of negativity from Goodreads and known bloggers.. I don’t know if it is worth the try ?

Shadow Study by Maria v. Snyder. LOVED the Study series, and was kind of sad after the third one that it was finished. But then, out of nowhere, a fourth book came !! AWESOME. Except that the version I have is more rare, and expensive.. So I have been waiting for it to became cheaper.. And am still waiting XD But now the next one will come out this year, so I will have to man up and buy it.

The Libby Garrett Intervention by Kelly Oram. In a short time she has become one of my favourite authors, I love her way of writing, so captivating. So when a new book was coming I was counting down the days for it to be published !! Downside though in living in the Netherlands, that some books don’t really make an appearance here.. So I waited.. And now I have it !!! But it is already 2016 XD

A Court of Thorns and Roses by Sarah Maas. Another book with no reason whatsoever why I haven’t read it. It is in my bookcase.. still looking new and pretty.. REALLY need to pick this one up as well soon.

End of Days by Susan Ee. Pre-ordered it, got it in on time but never read it. I do have a reason (even though it is not a great one).. It is the last part. And I have trouble with last books in a series, I don’t want it to end and I just put it off.. BUT ! I have this one in my resolution for this year !! So I will finish !!!

Red Queen by Victoria Aveyard. I have this one in my bookcase as well for quite a while.. Big hype around it too.. But never gotten to it. Should pick it up… And the next part will be out soon, so I can continue right away.

The Winner’s Crime by Marie Rutkoski. How I enjoyed the first one !! Something different and cool !! I ate it all up.. But this is one of the series that got lost in all the other need-to-read pile.. But the last one will come soon, so I’ll wait for that and then finish it all at once.

Those are my Top Ten picks, what books did you meant to read but didn’t, and why ? Share below in the comments !!!