REVIEW The Sound of Us. *PLUS GIVEAWAYS* 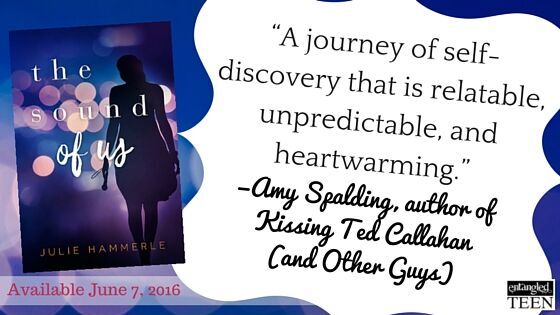 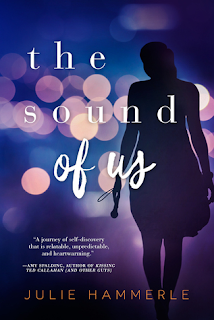 Thank you YA Bound Book Tours for giving me the opportunity to read and review this book !

She’s put her TV-loving, nerdy self aside for one summer to prove she’s got what it takes: she can be cool enough to make friends, she can earn that music scholarship, and she can get into Krause University’s music program.

Except camp has rigid conduct rules—which means her thrilling late-night jam session with the hot drummer can’t happen again, even though they love all the same TV shows, and fifteen minutes making music with him meant more than every aria she’s ever sung.

But when someone starts snitching on rule breakers and getting them kicked out, music camp turns into survival of the fittest. If Kiki’s going to get that scholarship, her chance to make true friends—and her chance with the drummer guy—might cost her the future she wants more than anything.

REVIEW.
I was hooked after that pretty cover, so beautiful !! That combined with the description got me over completely. I got a movie feeling, you know? It sounds like this could be a movie, some sort of Pitch Perfect-ish and I’m really into those kind of movies. So, why not as a book?

And I had a lot of fun reading this book and getting to know the characters. We have the main character of course, who was likeable enough, and some other characters around her who were a lot of fun. It was kind of like watching a movie, and I flew through the pages.

Julie Hammerle has an awesome way of writing, easy to read and fun. She combined her world with some real stuff, like references to Buffy and Harry Potter. I always enjoy that. And together with a TV-show that I wish was real, Project Earth, and a kick-ass heroine.
But.. this book has a lot of flaws..

For me though, one of the major downsides to books about music is well.. You can’t hear it. You can’t make up your own mind about the music, while music is something that has a very personal taste and everybody thinks different about it. You only read about it from the narrator’s view, and follow her opinion. I would love to hear them sing haha, but well, books are books.
So about our main character, Kiki,  I did like her.. but I didn’t love her. Sometimes she just made the most ridiculous choices that I did not get at all. **SPOILER ALERT** Like when you find out the guy you have been crushing on and wants to take you on a date has a girlfriend he forgot to mention? Big turn-off. I would not continue on with him and tempt yourself further, knowing that he has lied to you. Big time. For weeks and weeks, and you only found out by accident.. Who knows if he would ever have told you? And even worse, you know he has it in him and apparently has no trouble lying. Way to start a new relationship, based on lies. Nope. Not for me. **SPOILER END**
So well.. I did not love the romance. It was there and multiple love interests, but from the beginning it was clear she would really be going for just that one guy.. and I did not like that guy. He wasn’t good enough for her, and I did not like how it went. And at the ending it was just MEH..
I did not like the parents, and I could not fully understand why they behaved like that. Even though she started a lot of hobbies and did not finish them, it is still your child. You don’t go down on your child like that, acting like she can’t do anything and give her the feeling she is a big failure. You’re supposed to be supportive. And yes, supposed to be doesn’t mean that everybody actually does that.. But still, I found it kind of weird how they acted.. And would have liked to know more about why they did that.. I did not find this sufficient explanation.
The same for the top teacher at Krauss, the supposed best friend Beth, Mary.. They all have some weird messed-up relationships that I do not get.
And even though this book was funny and light, and most certainly fun to read, it missed a lot of background. People acted in certain ways (like the parents) but I did not find any reason behind it.. And I missed that. I need that. I need to know why people act the way they do.. otherwise it is just weird and unnecessary and make for some really messed-up life.
FINAL THOUGHTS.
This was a nice and funny read. I was entertained, and if you don’t look close enough it is just fine. But I am getting more and more critical with the more I read.. It had a lot of flaws and because of that I didn’t love it. It missed a lot background, character development and the romance was not to my liking. This is more of an in-between read, fun for a while and then you can go on to the better stuff. So yeah, I can’t give this more than 3 Freyja’s, and that’s me being in a good mood.