Review. If There's No Tomorrow 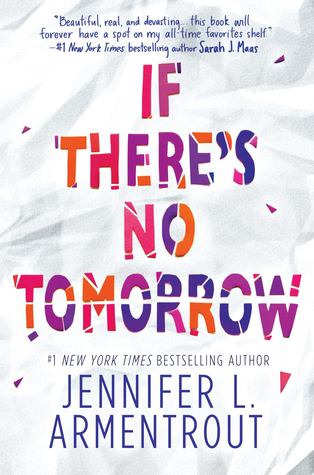 Description.
Lena Wise is always looking forward to tomorrow, especially at the start of her senior year. She's ready to pack in as much friend time as possible, to finish college applications and to maybe let her childhood best friend Sebastian know how she really feels about him. For Lena, the upcoming year is going to be epic—one of opportunities and chances.
Until one choice, one moment, destroys everything.
Now Lena isn't looking forward to tomorrow. Not when friend time may never be the same. Not when college applications feel all but impossible. Not when Sebastian might never forgive her for what happened.
For what she let happen.

REVIEW.
This was a difficult novel for me. Not only to read, but also to review. Don’t get me wrong, I love Jennifer L. Armentrout. She is one of my favourites for YA fantasy, her adore her Covenant series, had immensely much fun reading her Lux series and I can’t wait to continue the Wicked Saga soon.
But her contemporary novels ? They don’t really do it for me.

I read The Problem with Forever last year, and honesty? I was kind of disappointed. I thought it was boring and predictable. I also missed the emotion that I want from a good YA Contemporary.
So I was not really sure how much I would like this one, but it is still a JLA book, so I had to try anyway.

The first part of the book I had a lot of feelings. I immediately related to the MC and really felt for her. Even though I did not agree with some of the MC’s ways and some small treats starting to annoy me, the way this novel was written got to me. I was really into it for the first 30/40-ish percent.

I also really enjoyed the female friendships in this novel. Even though her main focus was on the love interest, her friends stayed important throughout the novel and had a part in her well-being. It is necessary not to only focus on the lover, but to keep other friendships in there as well. It makes the book more well-rounded and gives the MC more depth. I miss that in a lot of YA Contemporary, and I found it very interesting how her relationship with her friends suffered/changed with the accident.

Now, before I start on the problems I had with this novel, I have so say that the message behind this novel is very important. There are way too many car accidents caused by drunk driving. Way too many lives taken too early because of one mistake. And no matter what I think of the rest of the story, this is a message cannot be repeated enough.

My biggest issue was with the plot. After the big reveal of what really happened that faithful night, I got kind of bored. It felt like she was building up the mystery to what really happened, and when she explained what happened after 25% of the novel, I felt like it was almost finished. Which of course was not the case.. XD But it did make me restless for the remaining of the novel and I skimmed a lot because of that finished feel. It is like I fell completely out of love with it. I could not get back into it, could not get those feelings back, I just felt done with it.

I also found the plot really predictable. Yes, it is a contemporary.. but you can still try to be innovative and bring something new into the mix. That did not happen here. It is the same as so many other novels, we have seen this so many times, read about it a lot already, and even though this topic is still very important today, it has been done too much already. It is just the same as all the others.

I did like Lena (our MC) at the beginning, but the further I got, the less I liked her. One minute she was pretending she didn’t need anyone, and the next she kept whining about what other people thought of her. She was so naïve and self-absorbed (yes I get that what happened to her was a big deal), but I really disliked how she made everything about her, while so many other people got hurt too.

And our love interest… Damn he was dull !! He had no personality and was way too perfect. Give me some flaws, something to dislike about him to make him more human. He was just such a cliché and ideal and faultless.. I did not feel much for him or their romance.

So this second try at a YA Contemporary by Jennifer L. Armentrout did also not work for me. It started out good, but after the big finish about 25% of the book I felt like I was done with it. The novel got boring and cliché and did not have much character. Maybe if you’re still new to all of this you will like it, but for an experienced reader it just not good enough.

To me it feels like she is a much better writer when you throw in some Fantasy elements. I’m not sure if I will read another one of her YA contemporary’s…