Author: Marie Janice Davidson
Publisher: Berkley
Release Date: March 2004
Pages: 255
How I got the book: Bought it years ago at a bookstore 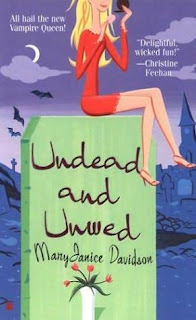 Summary
It'a been a helluva week for Betsy Taylor. First, she loses her job. Then, to top things off, she's killed in a car accident. But what really bites (besides waking up in the morgue dressed in a pink suit and cheap shoes courtesy of her stepmother) is that she can't seem to stay dead. Every night she rises with a horrible craving for blood. She's not taking too well to a liquid diet.
Worst of all, her new friends have the ridiculous idea that Betsy is the prophesied vampire queen, and they want her help in overthrowing the most obnoxious, power-hungry vampire in five centuries - a badly dressed Bela Lugosi wannabe, natch. Frankly, Betsy couldn't care less about vamp politics, but they have a powerful weapon of persuasion: designer shoes. How can any self-respecting girl say now? But a collection of Ferragamos isn't the only temptation for Betsy. It's just a lot safer than the scrumptious Sinclair - a seductive bloodsucker whose sexy gaze seems as dangerous as a stake through the heart...

Stand alone or series: Series, this is the first one of the Undead Series, and.. woow already 11 parts and the 12th is coming this year !

Why did I read this book: I had it in my bookcase for years, and every time I  thought about reading it, I put it back. Don’t know why, I just found other books I liked more. But recently I’m trying to claw through my older books and read them as well. I’ve the bad habit to grab the newest ones every time and my unread older book pile just keeps getting bigger. But no more !

Cover impressions: It has a cartoonish/chick lit kind of cover. It’s not pretty or special, just simple. Like Shadowland, it fits it’s purpose.

Review
I was pleasantly surprised with this one, I liked it. At the beginning I was skeptic, weird chick with shoe fetish being a vampire queen ? But it was funny and fabulously sarcastic. I love those.

Our main character, Betsy (poor woman, not the best name to have) is a steady  and sober person. As a human she was simple and didn’t have a very spectacular life, but when she got killed in a car accident she changed into a vampire. When she first wakes up in the morgue she’s very shocked. First of all is she still alive, or well, undead, and second of all is she wearing ugly knock-off shoes ! So what is she going to do ? She tries to kill herself, over and over, but it doesn’t work. Awesome.

What I liked about this one, is how different it is from the usual clichés. Normally when someone dies and becomes a vampire they go all evil and become an other person. She is still Betsy and she goes back home to her friends and family. Some people don’t agree on that, and try to kidnap her (yes the other vampires), but she is very grounded and sober. When she meets the vampire “king” it goes like this:


The speaker was approaching me from the far side of the chilly stone room. He wasn't nearly as impressive as the other guy: medium height, slightly chubby around the middle, a cleft chin (what Jessica would call, with unfailing tact, "an ass face"), watery blue eyes. And—(groan!)—dressed in a black tuxedo. Not a cape, but almost as bad. "First—and I require this of all new Undead Children—" That's just how he said it, too. You could hear the capital letters. "—you must get down on those dimpled knees of yours and swear fealty to me. Then we will Feast, and you will Rest at my side, our newest Undead Child, and my current Favorite."
I didn't mean to. I didn't want to. But I started to laugh and just couldn't stop. Everyone else in the room stopped rustling and murmuring, and turned shocked gazes in my direction. Except Mr. Gorgeous in the corner. His eyebrows arched and his lips twisted, but he didn't smile. He just studied me with that perfect, icy gaze.
"Stop it!"
"I can't," I giggled.
"I command you to stop laughing! You will not be allowed to Drink at the Sacred Throats of our—"
"Stop, stop, you're killing me!" I giggled and snorted and leaned against a stone bust of a Carlson so I wouldn't fall down. "Next you'll tell me there will be dire consequences for daring to mock your august self."
He pointed a finger at me. Nothing happened. This surprised him, and it also pissed him off. "Gentlemen! Punish her!"
This set me off into gales of laughter again. The Cocker Boys approached me, brandishing crosses, and one of them hurled water into my face. I must have sucked some in from laughing, because I started to sneeze. And laugh. And sneeze. And laugh. When I finally had control of myself the Cocker Boys were backed in the far corner, behind Tux Boy, and all the other vampires—except one—were wedged as far from me as I could get.
"Oh, dear," I said. I wiped my eyes. I hadn't actually cried, of course, but my face was wet with holy water. "Oh, that was really great. Well worth the price of parking downtown. And hardly anything is, you know. Except maybe a show at The Guthrie."
"You're a vampire," Tux Boy said, except he didn't thunder it majestically this time. It sort of squeaked out.
"Thanks for the news flash, but I figured that out when I woke up dead a couple of days ago."
"But...but you..."
"Well! This has been fun, but I think I'll be going now."
"But...but you..."
"But...but I was curious so I came along for the ride. However, if hanging with other vamps means I have to go the whole movie cliché route, then forget it. Cemeteries? Acolytes? Partying in chilly mausoleums? Yuck-o. Also, nobody wears a tux this time of year unless they're going to a wedding. You look like an escapee from the set of Dracula Does Doris."

So let’s all just agree and admit that Betsy is awesome. She dislikes the clichés and mocks them, beautiful. This is the setting for the entire story, she mocks and waves away all the vampire bullshit, and take care of things in her own way. If you don’t like that, this is not a book for you.

Later on in the story it becomes clear that there is some kind of vampire war between the fake Dracula and THE love interest, Sinclair. She’s the one who can stop it, because she was foretold to be queen of all. I know, it’s not a deep and complicated story, but it’s just a lighter read with a not to serious plot. The plot in fact, is rather shallow, but it’s just how the story is and it fits this way.

I liked the other characters as well, her best friend is awesome and accepts her very well. The gay friend she makes when she saves him from killing himself is a very good person as well, and I hope to find out more about them later on in the series. Also her mother is rather funny and takes her daughter being a vampire pretty well.
Her stepmom is just awful, but isn’t it always like that? I love how they put her in her place.

There are also some hot scenes in the story, based on the need to feed. When a vampire feeds from a human they (the humans) get all hot and need to finish those feelings with some sex.. *giggle* Okay, kind of weird.. but well, it gives some nice and detailed scenes some of you might appreciate ^^

Rating
So rating this one was kind of difficult. Don’t get me wrong I like the story and I enjoyed reading it, but it’s not a masterpiece. But I wasn’t annoyed with anything going wrong in the story so I would be going for a 4 Freyja’s, but because the level of the plot, and well it’s rather shallow sometimes I think I’m going for a 3.5 Freyja’s. I would recommend it for a sexy and funny read in between,  when your done for the moment with all the serious and brooding super naturals.