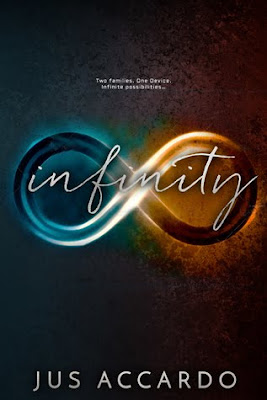 Description.
Nobody said being the daughter of an army general was easy. But when her dad sends a teenage subordinate to babysit her while he’s away… That’s taking it a step too far.

Cade, as beautiful as he is deadly, watches Kori with more than just interest. He looks at her like he knows her very soul. And when he saves her from a seemingly random attack, well, that’s when things get weird.

Turns out, Kori’s dad isn’t just an army general—he’s the head of a secret government project that has invented a way to travel between parallel dimensions. Dimensions where there are infinite Koris, infinite Cades…and apparently, on every other Earth, they’re madly in love.

Falling for a soldier is the last thing on Kori’s mind. Especially when she finds herself in a deadly crossfire, and someone from another Earth is hell-bent on revenge…

REVIEW.
So yeah… let’s get started. I’ve read part of her other series a couple of years ago (Denazen) and was really into it. Even though it kind of sucks that she still hasn’t bothered to finish that series, my interest got peaked when she came with a new series.

One of the main reasons this premises spoke to me is because it is about different dimensions, and I was really curious how it would turn out. To me, it seemed like this is a plot that has not been done much before, and I’m all for originality in my YA Fantasy plots.

I liked the IDEA of travelling between different dimensions. I mean how cool is it that you (only not really you, but still kind of you) exist on different planes, only in different circumstances ? The options are infinite.. (HA) The developments in science, how the world evolved, nature, cultural differences, makes my geeky heart beat faster just thinking about it !

·   I think I liked Noah ? A bit ? Mostly because we don’t know much about him and he is hungry all the time (which reminds me of Dean from Supernatural). Which are not great reasons, but compared to the others it makes him my favourite character in this book.

·  About him, I liked how he handled the whole Kori is my sister, but not really my sister a lot more healthy then some other character who I shall not name.. *Ahum* CADE *Ahum*
·
I think that’s all…

Unfortunately I have a lot more of these, starting with working out the idea of travelling between dimensions. HOW do they do it ?? Look I know I started skimming about halfway.. but still, I think I would have remembered reading it (I hope). I know they got these bracelets that allow them to travel, but HOW do they work ??? I don’t need the whole mathematic formula or whatever, but do give me some background information on how it came to be. I care, and it is important for the word-building.. because I felt like I did not have much to go on here.

·   Look I know the plot is arranged around Dylan killing people and it is explained WHY he went psycho.. But still. I’m disagreeing on it being a valid reason to go all psycho and kill all the innocent Kori’s. Especially because of well, family. Cade is your brother. Your own flesh and blood, the boy you grew up with. Not to mention the Anderson family took you in. And all of that means nothing because your girlfriend died in a car accident ?? Emphasize on ACCIDENT. As in NOT ON PURPOSE ?? I know we cannot reason with psycho killers, but still, I’m disagreeing.

·  The romance. This was a really BIG NO for me. He already had a Kori, his own girlfriend Kori who got killed. Taking away that they might have some personal differences in character, they still look the same and are, more or less, the same person. Because of that I do not think it is a good (let along healthy) idea to hook up. I mean, come on. “Oh no my Kori died, let’s travel to a different dimension and go for the next Kori!” That’s just f*cked-up. Not romantic people, that’s not a healthy relationship !!

·  About Cade.. I did not like him. He had the personality of a.. well, he didn’t have one. He was like an empty cart box. No substance and quite boring.

·   Talking about not liking someone.. Let’s talk about our MC Kori ! She started out okay, a bit of a rebel, girl power and all. But when Cade came into the picture she changed into a whiny, angsty, damsel in distress (who still pretended to be independent). Because of that I did not care for her, at all. I mean, come on ! You just found out people travel between dimensions and all you care about is whether Cade really likes you or just likes you because you are his dead girlfriend. I mean, you are not really his dead girlfriend.. but, you kind of are… Which is not weird or wrong at all..
·
It seems kind of hypocritical to me, to blame Dylan for travelling between dimensions for getting another Ava to be his girlfriend, which is wrong according to them (HA!), but meanwhile Cade is doing the same and that is okay ???

I’m disappointed ? This was not what I hoped it would be. It was way too much cheesy weird romance, and not enough travel between dimensions !! I want to see other worlds, different cultures, lots of travel, even more action and MUCH LESS teen angst about whether he likes you or that you remind him too much of his dead girlfriend… You know, since you’re the same person and that’s not creepy at all.. (Sorry I just can’t let it go) Because of this I started skimming about halfway through the book, and I was glad when it was over. Though at the end they finally seemed to get to it, so I do plan on reading the next one, especially now that I know this one has the POV of Noah and Ash (who seem way more interesting)!