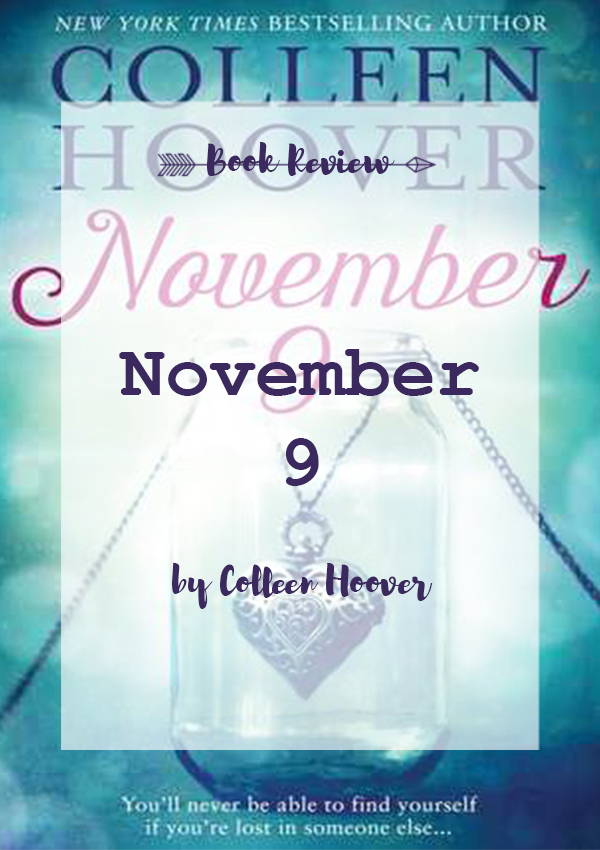 Fallon meets Ben, an aspiring novelist, the day before her scheduled cross-country move. Their untimely attraction leads them to spend Fallon’s last day in L.A. together, and her eventful life becomes the creative inspiration Ben has always sought for his novel. Over time and amidst the various relationships and tribulations of their own separate lives, they continue to meet on the same date every year. Until one day Fallon becomes unsure if Ben has been telling her the truth or fabricating a perfect reality for the sake of the ultimate plot twist. 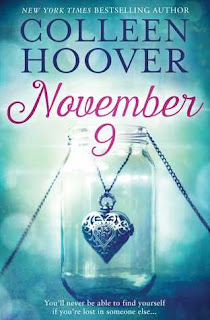 Review.
I was really in the mood for another Colleen Hoover book. I love her work, especially her latest release, It Ends With Us, was a perfect little masterpiece and I wanted more like that. I love how Hoover seems to hijack my feelings, toys around with them and completely destroy me emotionally at the end.

So I hoped that November 9 was like that.. but alas, it wasn’t.

Even though it turned out obvious at the end, for most of the story I had no clue wat was wrong with Ben. What was his big secret? Why did his brother punch him in front of her? What happened with his mother? I had no idea.. I like that ! Even though most of the story didn’t capture me as I would have liked, it did keep me interested.

I liked how this book was like a novel within a novel. How the MC’s lived their own story within a story. We knew from the beginning that Ben was not who he wanted to be and fabricated a better self for Fallon and I liked that idea. Could have been better.. But I like the concept.

I will say this right away: I was disappointed.

I was looking for some epic, big traumatic romance that held me captive, unable to let me go until the very end, with lots of swooning moments, heart stopping revelations, heart-breaking drama and that made me feel. This book did not make me feel.

Not only did I feel along with the MC’s, I also did not care for them (most likely why I didn’t feel). I don’t know.. It just wasn’t there.

Fallon was kind of whiny and made a lot of weird assumptions. I found the way she thinks and rationalised things well, not the way I would think.. I could not relate to her.

Also, when the love of your life breaks down because his brother just died.. You stay there for him. You help him through it. You do not leave because of some weird assumption that it would be better for him. How is it good for someone when the only person who makes him feel better leaves just after one of his closest friends/brother just died ?? And says she doesn’t love him as much as he loves her?? That’s just stupid.

Also.. the thing with her father. Even though things take a different turn, HE STILL FORGAT YOU. I thought that the main reason she was upset with him was because he left her there in the fire ?? And because of how he abandoned her after. And then all of the sudden everything is forgotten?? That makes no sense !!!

And let’s not even get started on Ben. Ugh. Such a control freak. I hated some of his lines so much !! So cheesy and creepy. Not sexy AT ALL.

The instalove. I keep telling it, but I do not like instalove. I dislike it very much and I do not find it believable romance. Even though they admit it is indeed instalove, that doesn’t make it okay. No instalove is normally not cool, but now that we have it, it is totally okay ! NO IT ISN’T.

And I do want to comment on the whole concept of standing in each others way to develop and achieve their goals. Just because you love someone doesn't mean that you can't live the life you would have wanted. That's just BS.

I was very disappointed in this one. I wanted another It Ends With Us. Something that made me incredibly emotional and feel along with the MC. But this wasn’t it. Not for me atleast. I disliked the instalove romance and could not relate to the MC’s. Where I normally cannot put down a Colleen Hoover novel, I had to push myself to pick it up and continue. So I would like to give this one 2 cats, because it was not what I was looking for and did not enjoy myself while reading it.